The price of Bitcoin is set to test lower levels as support after numerous attempts to break $10,000 have failed.

Since May 20 Bitcoin (BTC) price has dropped nearly 10%, shifting traders’ focus from taking out the $10K resistance to now holding above the all-important $8,800 support.&

The short-term bearish trend took hold after the top-ranked crypto-asset on CoinMarketCap experienced repeated rejections near the $10K mark, which took the form of higher lows at $9,942, $9,905 and $9,849.&

Failure to set a higher high above these levels and the steady loss of momentum eventually caused the price to drop below the bullish pennant and the last two days have seen the bearish move intensify.&

For the time being, Bitcoin price continues to find support at the ascending channel trendline but the strength of each bounce from this support is beginning to thin and a number of traders are now calling for a revisit to $7,400-$6,500 if the $8,800-$8,575 support gives out.& 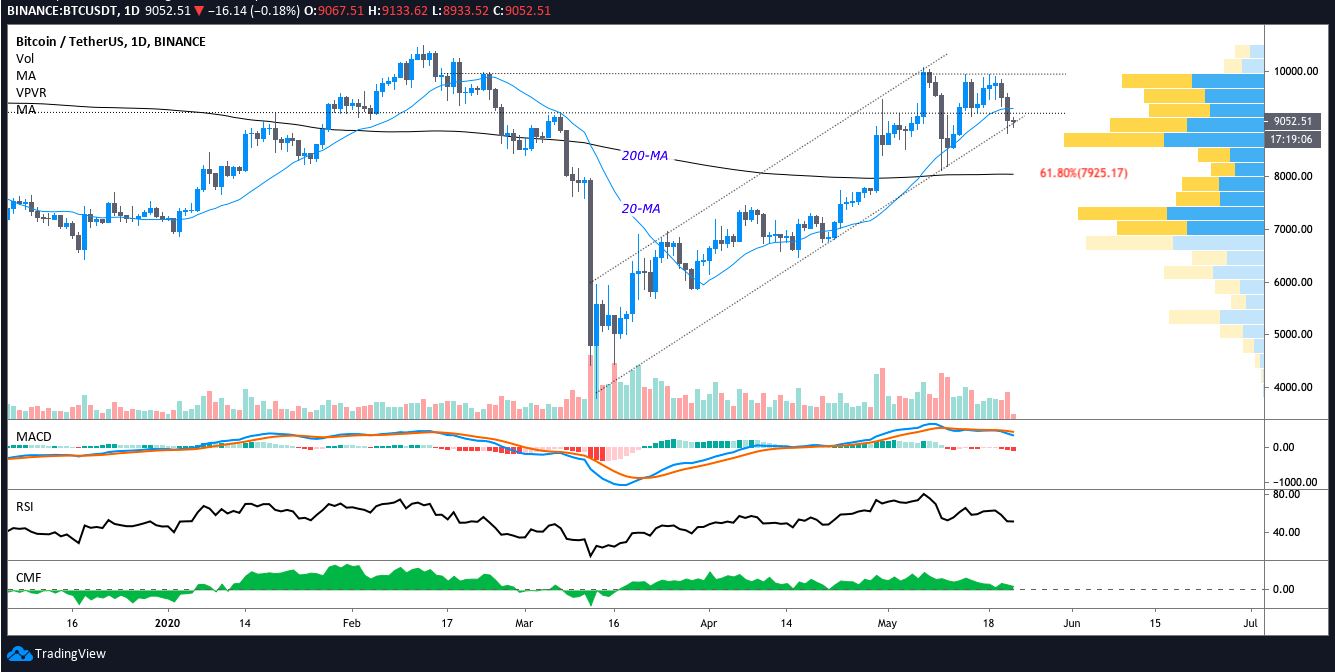 As shown in the daily time frame the price is currently pinned between two high volume VPVR nodes extending from $9,100-$8,575. While the price has dipped below the 20-day moving average for the first time in nine days, Bitcoin is still above the 100 and 200-day moving averages, which are both located near $8,000.&

Traders favoring the Bollinger Band indicator will notice that the price dropped below the indicator’s moving average and as selling pressure mounts a drop to the lower band at $8,460 becomes increasingly likely.&

Back in April when the price traded below $8,000, many analysts predicted that $8,000 would be a formidable resistance to overcome. But as readers may recall, Bitcoin blasted above this level with ease, meaning the price could also slice through this level during a sharp downside move.& &

In the event of further action to the downside, traders might reconsider the idea of viewing the 100 and 200 MA at $8,000 as a strong level of support. Given the VPVR volume gap around this price, a correction to $7,400 seems more likely.&

A drop below $7.4K isn’t curtains for Bitcoin price 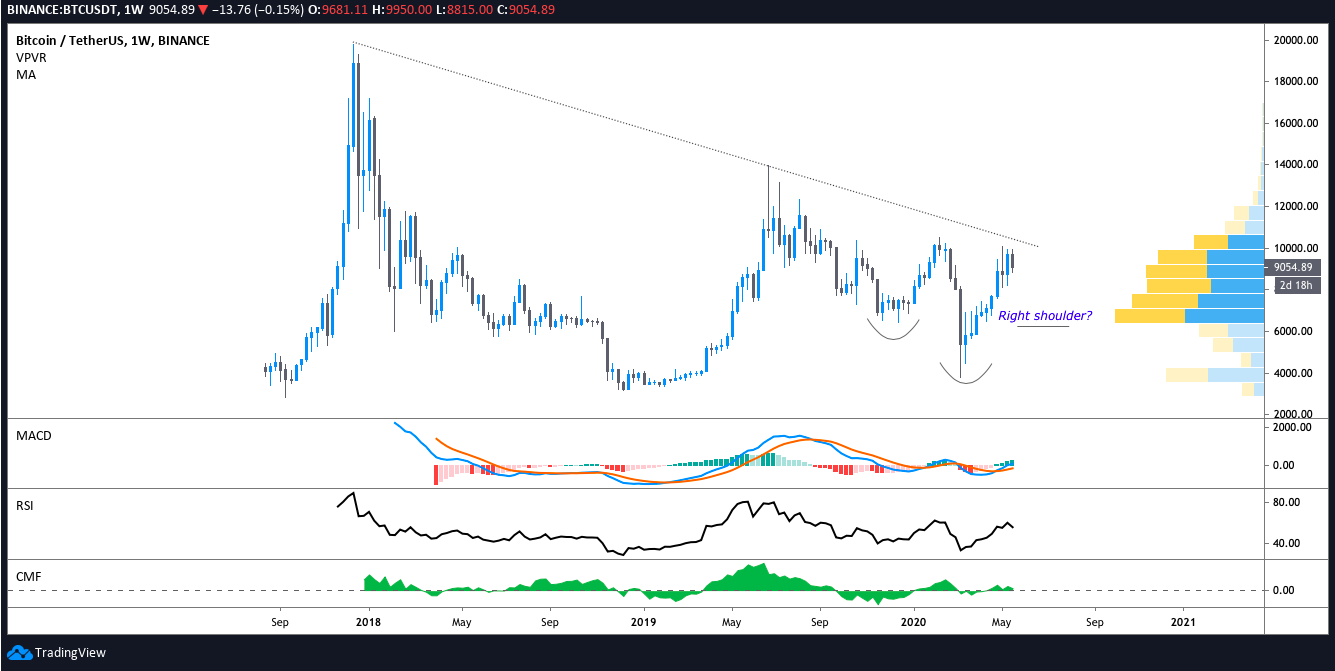 Meanwhile, a few traders are already targeting the $6,400 area, citing the formation of an inverse head and shoulders pattern on the weekly timeframe. A drop below the high volume VPVR node at $7,057-$6,385 would complete the right shoulder and the eventual push above the neckline at $9,800 would have traders eyeballing $14,000 as the result of the pattern completing.&

Such a move would surpass the 2019 high at $13,950 and set Bitcoin price up for a shot at a new all-time high. This would take a while to play out and it is difficult to predict how things would play out as the price could: complete the neckline and spring upward, roll over for a lengthy consolidation period, or rally to $10K only to meet resistance at the long-term descending trendline again.&

With that said, it's still something to consider and keep in the back of one’s mind.& Currently, the 4-hour timeframe shows Bitcoin price is in the process of an oversold bounce as the RSI has begun to reverse course from 30. The MACD histogram has also turned light pink but both the signal line and MACD continue to project downward and do not appear ready to cross.&

While playing oversold bounces at the ascending channel trendline has been a profitable strategy since April 16, the current price action has not broken the pattern of lower highs and lower lows, and the purchasing volume response is less than satisfactory.&

Risk-averse traders could watch for a 4-hour candle close above $9,250 or even wait for the digital asset to close above the 20-MA at $9,500 on the 4-hour chart. This would place the price back above the Bollinger Band moving average and a key support/resistance level.&

As things currently stand, Bitcoin price remains in an uptrend until the price closes below the ascending channel.& &